CADASIL (Cerebral Autosomal Dominant Arteriopathy with Sub-cortical Infarcts and Leukoencephalopathy) is an inherited disease of the blood vessels that occurs when the thickening of blood vessel walls blocks the flow of blood to the brain. The disease primarily affects the small blood vessels in the white matter of the brain. 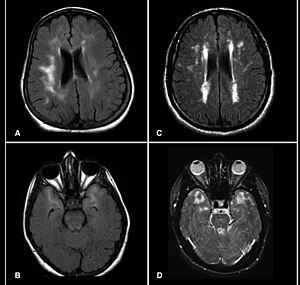 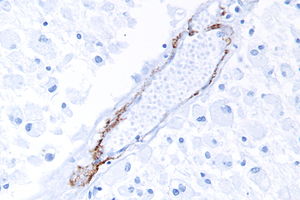 CADASIL is likely a rare condition; however, its prevalence is unknown.

The most common signs and symptoms of CADASIL are caused by damage to small blood vessels, especially those within the brain and include: stroke, cognitive impairment, migraine with aura, and psychiatric disturbances. These symptoms are:

Less common signs and symptoms may include:

CADASIL should be suspected in individuals with unexplained white matter hyperintensities and a family history of stroke and/or vascular dementia; however, lack of an apparent family history of CADASIL does not preclude the diagnosis . The following clinical signs and neuroimaging findings can be observed in CADASIL.[1][1].

The diagnosis of CADASIL is established in a proband either by identification of a heterozygous pathogenic variant in NOTCH3 by molecular genetic testing.

CADASIL is a rare disease.